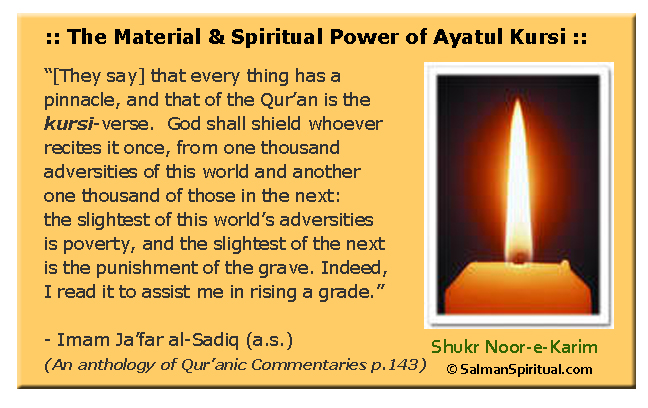 Ya Ali Madad. The most powerful ayat in the Holy Quran is Ayatul Kursi, the Verse of the Throne. The text and the English translation are presented below:

Allah! There is no God save Him, the Alive, the Eternal. Neither slumber nor sleep overtaketh Him. Unto Him belongeth whatsoever is in the heavens and whatsoever is in the earth. Who is he that intercedeth with Him save by His leave? He knoweth that which is in front of them and that which is behind them, while they encompass nothing of His knowledge save what He will. His throne includeth the heavens and the earth, and He is never weary of preserving them. He is the Sublime, the Tremendous.

Here is a powerful synthesis of the commentaries on Ayatul Kursi:

The verse begins with an affirmation of God’s absolute oneness: God, there is no God except Him, thus no matter what names of His or what aspects of Him are mentioned, they all pertain to the One God. The verse then goes to describe as the living, the Eternal Sustainer (al-hayy al-qayyum). The two terms are intrinsically related for the commentators, since it is precisely because God is ‘the eternally living’ that he becomes ‘the eternal sustainer’ of His creation.

Amongst other things, the verse proclaims that the divine being is not hampered by fundamental human and corporeal weaknesses. God does nor sleep, nor will He ever fall into somnolence; He manages and sustains the whole of the heavens and earth; God has absolute sovereignty in all matters, since there exists no one that can mediate His decrees, unless He so wishes; He is omniscient and imparts knowledge to His creatures from the omniscience as He sees fit; the heavens and the earth form only a limited part of His dominion (kursi) of knowledge and power, and nothing relating to their management or preservation can even burden Him. The verse thus suggests that while human beings may come to know about certain things about God, perhaps even about certain aspects of the universe and the Hereafter, this is the result of divine favour from God, which He grants as He wills to whom He wills: And they [can] encompass nothing of His knowledge except such as He wills. Thus His maintenance of creation includes the expansion of human knowledge as God in His omniscience sees fit, even as it includes the power of intercession from His creatures, allocated by His wise permission. In effect, for the commentators most of the verse becomes an elaboration of how God is al-hayy al-qayyum.

If the verse starts with these two divine names which pertain to God’s intimate and vital relationship with His creation, the verse ends with the affirmation of the divine exalted transcendence: He is the High, the Tremendous. As ‘High’ (‘aliyy) and ‘Tremendous (‘azim), God encompasses and yet transcends His creation.

The most powerful ayat in the Holy Quran is Ayatul Kursi, the Verse of the Throne. It is one of the best source for the protection, healing, supplication and submission. It is the ayat which is being recited regularly and frequently in the Muslim world. I have coupled this with another powerful prayer, the Holy Salwat, which is also recited in different ways in the Muslim world.

In difficult times, I first read the text and translation of Ayatul Kursi and then sit in quiet spot and listen to the medley of Ayatul Kursi and Angelic Salwat. This has helped me to calm my mind so take a moment, listen to the audio, heal your soul and calm your mind. Supplicate and submit to our Creator and pray for the whole humanity because we are all created from a Single Soul!

There will be blessings of Divine help, a new light, a new of reflection, a new wisdom, a new way of living our precious lives as described the thematic commentary presented above.

Please download a mp3 track which has the recitation of Ayatul Kursi :

Please download a combined mp3 track which has the recitation of Ayatul Kursi and eight beads of Angelic Salwat:

May Noor Mowlana Hazar Imam fill your spiritual heart with his NOOR and nothing else and empower you to overcome fear, anxiety and uncertainty as we pass through this calamity! Ameen.