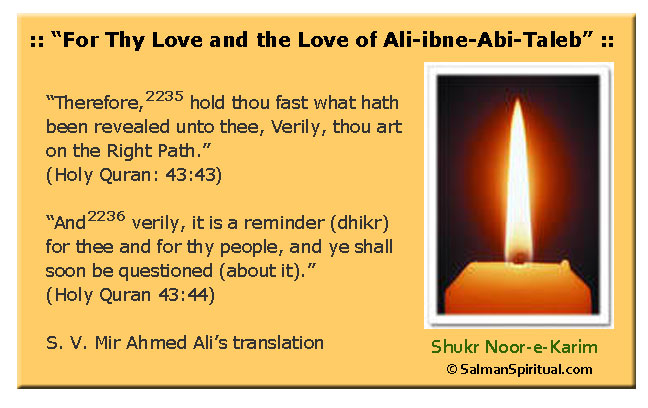 Ya Ali Madad, Yawm-e Ali Mubarak! On the occasion of the birthday commemoration of our first Holy Imam, Amir al-mu’minin, Noor Mowlana Murtaza Ali (alayhi salaam) , we would like to extend heartfelt felicitations to the global Jamat.

1. The Two Ayats from the Holy Quran

I have presented two ayats from the Holy Quran translation of S. V. Mir Ahmed Ali in the graphic of this post. Here the explanations:

Here is the commentary for the first ayat:

Jabir ibne Abdullah-e-Ansari reports that after returning from the ‘Hajjatul-wida‘ (i.e., the Last Haj), the Holy Prophet used to very frequently admonish and warn the people about holding fast to the command of Ali as set up at Ghadeer-e-Khum where the Holy Prophet under the command of God had declared ‘Of whomsoever I am the Lord, this Ali is his Lord.’ Rnv. 5:67, on the declaration of which, depended the completion of the apostleship of the Holy Prophet and the perfection of the faith as a duly regulated religion for mankind (Rnv. 5:3). (See Munaqib-ibne-Magha-zali, Fagihe-Shafayee). The concluding words of the verse indicate that to acknowledge Ali in the place of the Holy Prophet and to follow him is the right path.

Here is the commentary for the second ayat:

According to ‘Tha’alabi ‘, one of the renowned Sunni commentators, the Holy Prophet said that ‘On the night of Me’raj (Ascension) when I was in the heavens among the souls of the apostles of God, and angels, at the command of God desired me to ask the apostles with what basic object they had been sent into the world.’ When I asked them, they all unanimously declared, saying ‘We were sent for thy love and the love of Ali-ibne-Abi-Taleb’ i.e., for the faith, devotion to God and virtues personified in Ali.

From the first paragraph of the above commentary, it is the clear the people of the Dhikr, i.e., the Holy Quran, are the direct successors of the Holy Prophet. They are the ones who are endowed with complete knowledge, as described in ayat 36:12, to interpret the Holy Quran according to the needs of changing times.

The second paragraph of the commentary shows that the guidance of Allah come through the chain of holy prophets who were sent to this world. All these prophets were in the chain leading to the arrival of Prophet Muhammad, the final Messenger of Allah. The guidance of Allah after the final Messenger of Allah continues in this world through Hazrat Ali and the chain of Imamat leading our present and living Imam, Noor Mowlana Shah Karim Al-Hussaini (a.s.). Through our Bay’ah, we pledge our loyalty, devotion and obedience of our present and living Imam.

We are assured to saved from fear because Noor Mowlana Sultan Muhammad Shah (a.s.) has taught us that your have no fear in this world if you love the direct descendants of Muhammad and Ali. Through the immense love of our Holy Imam, we are blessed to love the Holy Prophet (s.a.s.), Noor Mowlana Murtaza Ali (a.s.), and all the Imams since Hazrat Ali (a.s.). His love for us far exceeds our love for him, therefore we should constantly increase our love for the Panj tan Pak (the five Holy Ones) and the Ahlul-Bayt by reciting the Angelic Salwat: Allâhumâ salli alâ Muhammadin wa âle Muhammad (O Allah! Bestow Peace on and through Muhammad and his Descendants). This will also help us in our personal search for higher spiritual enlightenment under the guidance of our Holy Imam.

2. The Revelation of the Holy Quran and Islam as Described by Hazrat Ali

In sermon 2 of Nahjul Balagha, Noor Mowlana Murtaza Ali (a.s.) has described the revelation of Holy Quran and Islam as follows:

I also stand witness that Muhammad (p.b.u.h.a.h.p.) is His slave and His Prophet. Allah sent him with the illustrious religion, effective emblem, written Book, effulgent light, sparkling gleam and decisive injunction in order to dispel doubts, present clear proofs, administer warning through signs and to warn of punishments. At that time people had fallen in vices whereby the rope of religion had been broken, the pillars of belief had been shaken, principles had been sacrileged, system had become topsy turvy, openings were narrow, passage was dark, guidance was unknown and darkness prevailed.

3. The Position of Aal an-Nabi (The Household of the Holy Prophet) as Described by Hazrat Ali

In sermon 2 of Nahjul Balagha, Noor Mowlana Murtaza Ali (a.s.) has described the position of Aal an-Nabi as follows:

They are the trustees of His secrets, shelter for His affairs, source of knowledge about Him, centre of His wisdom, valleys for His books and mountains of His religion. With them Allah straightened the bend of religion’s back and removed the trembling of its limbs.

… None in the Islamic community can be taken at par with the Progeny of the Prophet (Aalu Muhammad). One who was under their obligation cannot be matched with them. They are the foundation of religion and pillar of Belief.

4. The Shahada of Ismaili Muslims

In the second part of our Holy Dua, we recite the following:

There is no deity except Allah,
Muhammad is the Messenger of Allah
‘Aly – the master of believers is from Allah.
Our Lord Shah Karim al-Hussaini is our present living Imam

The first two lines, Laa ilaahaa il-laahu Muham-madur-Rasuululahi, binds us to all Muslims. The third line , ‘Aly-yun Amirul-Mu’minin, binds us to the Shias of Ali. The last line, Mawlana Shah Karimul-Husayni Al-Imamul-Hadirul-Mawjud, binds us to the 49th direct lineal descendant of the Holy Prophet (s.a.s.). We are blessed to have Ali-Zaman to guide us in every aspect of life. Al-Hamdu lil-lahi Rab-bil Aalamin (All praise is due to Allah, the Lord of the worlds). Yawm-e Ali Mubarak!

May our beloved NOOR Mowlana Hazar Imam, through the knowledge and barakat of the Holy Qur'an, Holy Ginans & Qasidas, Ayatul Kursi and Angelic Salwat, grant the global Jamat luminous (noorani) and spiritual (ruhani) tayid (help) to advance materially, spiritually and intellectually. May Mowla bestow Sunshine in our hearts, light in our foreheads, and the inner vision of the Truth in our intellects. Ameen.

May Noor Mowlana Hazar Imam fill our spiritual hearts with his NOOR and nothing else, and empower us to overcome fear, anxiety and uncertainty as we pass through this calamity! Ameen.

May the Almighty Creator help the whole humanity because we are all created from a Single Soul! Ameen.