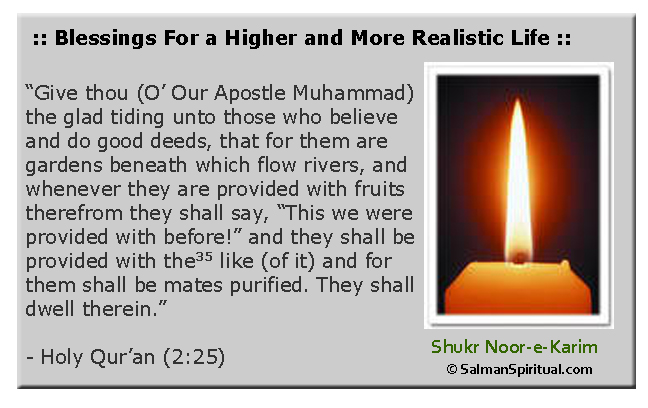 Ya Ali Madad and Happy New Year. A new year is a starting point for new beginnings and fills one with hope, courage and inspiration. On this first day of the new year, may Noor Mowlana Hazar Imam shower his immense baraqa by opening the Door of Enlightenment for all seekers of his Noor, and may this Noor ease the path of the returning the soul to its origin as well as bring respite in these turbulent times! Ameen.

Comparison of this Life and the Next Life

Let us begin with the ayat which is presented in the graphic:

“Give thou (O’ Our Apostle Muhammad) the glad tiding unto those who believe and do good deeds, that for them are gardens beneath which flow rivers, and whenever they are provided with fruits therefrom they shall say, “This we were provided with before!” and they shall be provided with the35 like (of it) and for them shall be mates purified. They shall dwell therein.”

Let us study the footnote for this ayat from S. V. Mir Ahmed Ali’s translation.

Vr. 25. (35) Man always relishes and enjoys things or events which are already known to him through his previous experience. Fruits which are promised to the virtuous in the hereafter, i.e., in the end, will be such which will be seeming to the recipients as already stated. The next life being the continuation of the present of the present one, it is proper and reasonable that the blessings herein should be analogous to be enjoyable by recipients adopted for the higher and the more realistic life.

The Holy Quran insists saying that the life hereafter is the developed continuation of the present life. Nothing of this life is destroyed there, but it is developed into a very refined form, more real and effective than its crude form of the terrestrial life. The earth and the earthly beings, animate and inanimate, man and all his faculties and the senses will be developed in a realm of real life in comparison to which the present life is a mere childish, playful and imitative value. As stated before, the real phase of the terrestrial phenomenon is in the heavenly sphere.

As points of reflection, I am now presenting three sayings of Noor Mowlana Murtaza Ali (a.s.). Here is the first one:

“Blessed be he who humbles himself, whose livelihood is pure, whose heart is chaste, whose habits are virtuous, who spends his savings (in the name of Allah), who prevents his tongue from speaking nonsense, who keeps people safe from evil, who is pleased with the (Prophet’s) Sonna, and who is unconnected with innovation (in religion).”

Here is the second one:

Imam Ali ibn Talib (a.s.) was asked what is good, he replied thus:
“Good is not that your wealth and progeny should be much, but good is that your knowledge should be much, your forbearance should be great, and that you should vie with other people in worship of Allah. If you do good deeds you thank Allah, but if you commit evil you seek forgiveness of Allah. In this world good is for two persons only; the man who commits sins but rectifies them by repentance; and the man who hastens towards good actions.”

Here is the third one:

“I wonder at the miser who is speeding towards the very destitution from which he wants to run away and misses the very ease of life which he covets. Consequently he passes his life in this world like the destitute, but will have to render an account in the next world like the rich.

May our beloved Imam NOOR Mowlana Shah Karim Al-Hussaini (a.s.) grant you, your family, your Jamat and the worldwide Jamat luminous (noorani) and spiritual (ruhani) tayid (help) to advance materially, spiritually and intellectually, and may He grant you the inner vision of the Truth. Ameen.

May our beloved NOOR Mowlana Hazar Imam, through the knowledge and barakat of the Holy Qur'an, Holy Ginans & Qasidas, Ayatul Kursi and Angelic Salwat, grant the global Jamat luminous (noorani) and spiritual (ruhani) tayid (help) to advance materially, spiritually and intellectually. May Mowla bestow Sunshine in our hearts, light in our foreheads, and the inner vision of the Truth in our intellects. Ameen.

May Noor Mowlana Hazar Imam fill our spiritual hearts with his NOOR and nothing else, and empower us to overcome fear, anxiety and uncertainty as we pass through this calamity! Ameen.

May the Almighty Creator help the whole humanity because we are all created from a Single Soul! Ameen.